If you’ve seen our shop windows (or the home page of this website) you know that Andrew Martinez likes to play with dolls. Sometimes I help out with costumes or props, but most windows are 100% his doing. 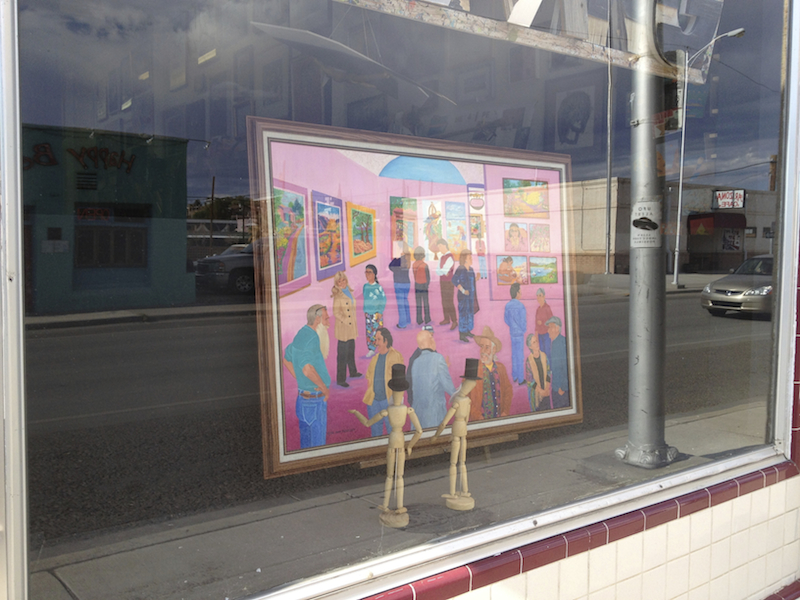 The window dressing shown above had its last hurrah yesterday. During its run, I noticed lots of people stopping to look at the painting, so I figured I’d write about it, tell you what I know, maybe say goodbye.

It’s a painting of an art opening at the “Libra Gallery.”  Without a doubt it’s of turn of the century-era Truth or Consequences, back in the day when there was an annual Libra Party.

Its creator, Betty Ann Pedersen (whose paintings are also featured in the gallery show in the painting), was a prolific painter who lived her last several years in Truth or Consequences. I didn’t meet her until after we bought the shop (so post-2007), when her husband John would bring her in to purchase art supplies. Betty Ann was always neat as a pin, in striking contrast to John’s endearing disheveled-ness — for some reason I even remember her wearing white gloves, but that has to be a detail I filled in on my own, right?

On her last few visits I could tell she was struggling to keep track of things. And John was so patient and doting and sweet with her.

When Betty died (2009 or ’10, if my own feeble memory serves), John cleared out her studio and brought us upwards of 30 pre-made frames, which we put on our floor to sell. At first he’d swing by and I’d pay him for what we’d sold, but eventually he copped a “naw, forgeddaboutit” attitude, even though he continued to bring us frames (which made me think Betty Ann had stashed them in the rafters, under the bed, and etc.). What a guy.

We also had, hanging in the shop, a portrait of Van Gogh that Betty Ann painted, and I called John a couple of times if a customer was nibbling, but – unfortunately, no one ever bit. Sure would have enjoyed finding a home for the painting and writing him a big check!

Around the time that Betty Ann died, my hairdresser Kathi Saenz, who also cut John’s hair at the International Hairport, offered to lend me “Buffalo Gal,” a book written by his daughter, Laura Pedersen.

In all honesty, I hate borrowing books about as much as I hate lending them (and one of my pet peeves is when people shove a book into my hands that I never wanted to borrow in the first place while saying “please get this back to me, I really don’t want to lose it”—people who do that need to stoppit), but I broke my no-borrow rule because Kathi said it was a fun read, and included a lot of references to John, and I was curious about Laura because we have a friend in common, Al Harp, who also grew up in Buffalo.

Here’s a passage about John from “Buffalo Gal”:

“Then there’s my dad, who is legally without memory the way some people are legally blind, and became so tired of losing his gloves that he wore mitten clips until he was fifty-seven. He only retired them because he moved to New Mexico, where he now regularly misplaces his cap.” (source)

I really enjoyed the book, and not just because I imagined that I  knew some of the characters. Laura’s a good writer and her wry sense of humor is right up my alley.

She was with John the last time I saw him — just before Christmas 2012, I spotted him across the street getting into her car, and I dashed over to give him one of our holiday cards, a gesture of appreciation for all he’d done for us.  He was a little shaky, but gracious, as ever.

Not too many months later, in March of this year (I’m guessing again), I saw John’s obituary in the local papers.

Soon afterward, a batch of Betty Ann’s paintings appeared at Community Thrift down on Broadway.

Our friend Joshua Frankel (general manager of the Sierra Grande Lodge here in town) bought the Libra Gallery painting and brought it down to our shop, curious to know if we knew who the characters were.  One person in the painting, Roy Lohr, is recognizable without a doubt — he’s the guy with the long white beard.

We figured out a few others – Sky, Aspen, Jacob Giron, maybe Addie McGarry.  I posted closeups of everyone on our Facebook page in hopes other people could help us ID some more.  But there turned out to be more mysteries than answers in this case.

Guess maybe we’ll never know who the lady in blue velvet is, or the fellow with the wishbone-shaped part in his hair, or the gent in the leather jacket, or the fellow in the newsboy cap.

It’s likely that some of them moved out of town (Sky, Aspen) or even off the planet, as people tend to do.