Adam Sturch, Seba Gallery, and then some

Seba Gallery, next door to our shop, had a contest in January—entry required purchasing raffle tickets and writing your name on each one, which I did. The prize was original artwork by Adam Sturch.

One of my tickets was drawn first, which meant I got to choose from all the unsold Sturch works on Seba’s wall. I put dibs on the super cool “Glimmers,” 8.25 x 7.25″ graphite on panel (shown below, first image).

During the February Art Hop I walked over to pick up the piece, and gallery owner Josh Candelaria indulged me by posing in a hilarious recreation of the pictures you see in newspapers of people giving things to other people.

Thank you Josh, and thanks also to (other) gallery owner Kyle Cunningham and, of course, artist Adam Sturch. 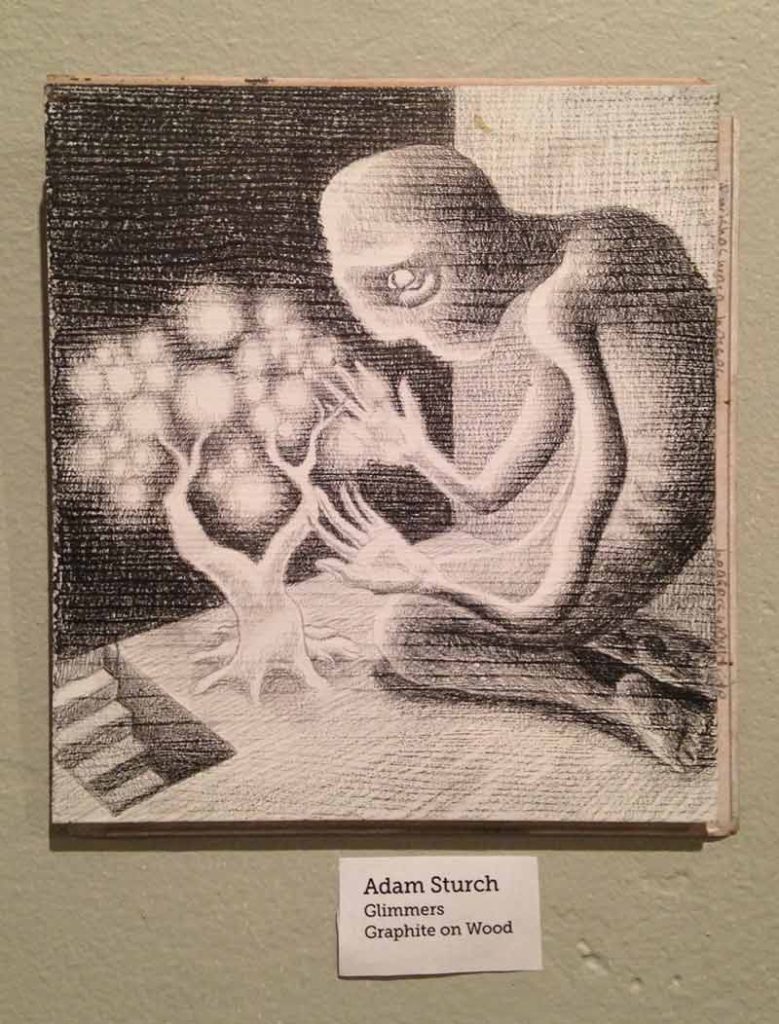 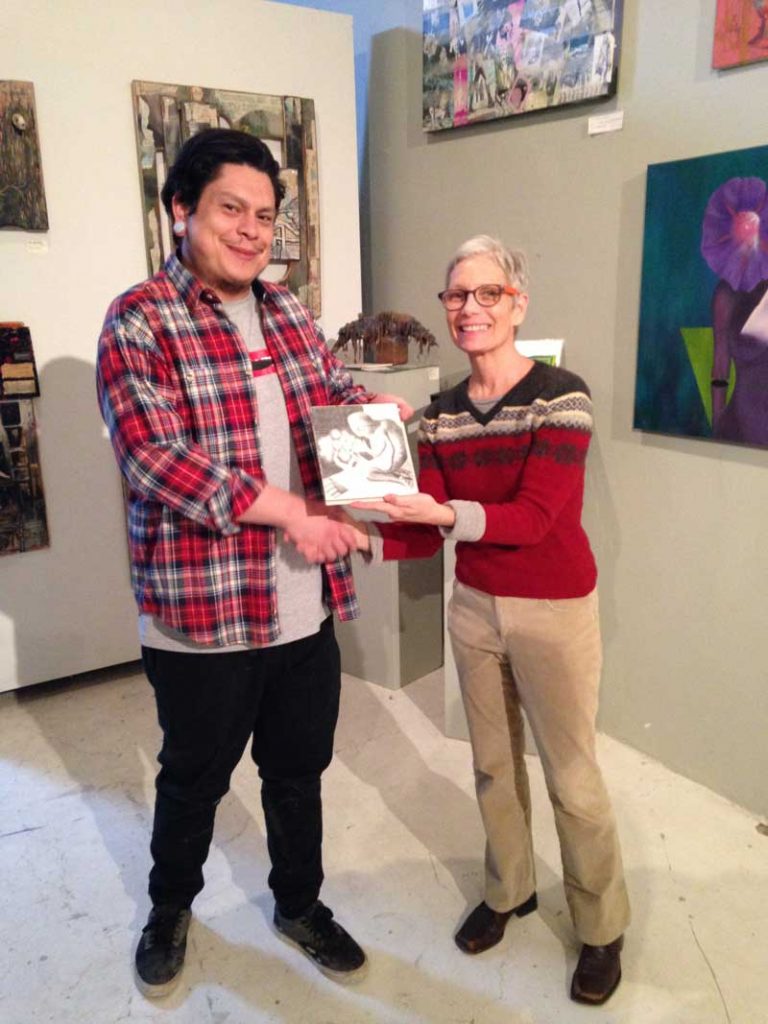 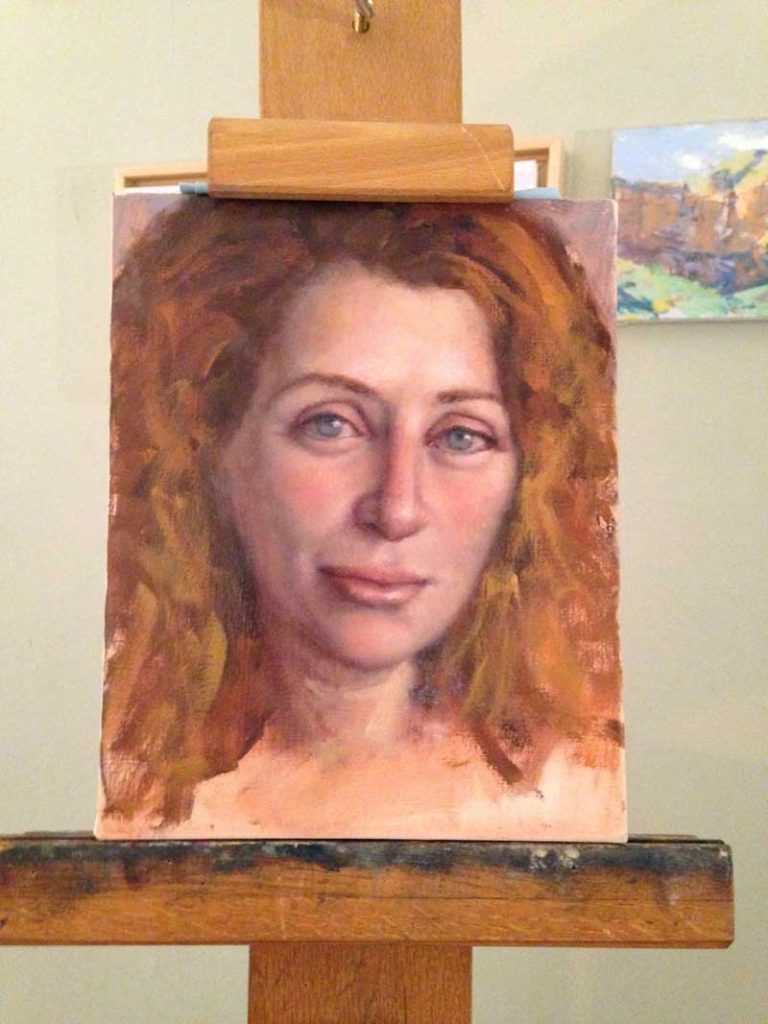 While exiting the gallery, “Glimmers” in hand, I saw a painting of Ann Sage on an easel. It’s there because portrait painter Leo Neufeld has moved in to share space at Seba, making it his studio whenever he’s in town and painting. He says the light in Seba is perfect for what he does (portraiture).

Leo is mostly from Albuquerque and has made a name for himself up there, but he’s gradually begun spending more time in T or C, where he’s had a few shows, and taught some painting workshops. In fact, he’s got another coming up, on February 20 and 21, and if you need supplies, we can hook you up.

But back to Seba. I can be an annoying stickler about pronouncy things, so I’ll tell you it’s said like “Seba” with a short e, but already I’m hearing “Seeba Seeba Seeba” everywhere, so much that I’m considering making this my new “it’s EpsTINE” project. Or maybe not.

The “it’s EpSTINE” project started when I noticed people around town referring to Fire Water Lodge owner Richard Epstein as “Richard Epsteen.” Once during a conversation Richard told me he didn’t really care how people say it, but officially the pronunciation was “Epstine.” I filed this away as “rhymes with Frankenstein,” thinking it was critically important. And every time someone mentioned Richard Epsteen, I’d set the record straight: “it’s EpSTINE.”

But one day a lady came into the shop and dropped his name. “I think you know my friend Richard Epsteen,” she said. I said “I do, but actually, it’s EpSTINE.” To which she replied “nnnno, it’s EpstEEN.” I dug in my heels: “nnno, he doesn’t really care, but I promise you, it’s EpSTINE.” And that is when she said “well actually I’ve been dating him for about a year, and I’m pretty sure.” And so the discussion was over.

The next time I saw Richard I relayed this amusing story. He reminded me that he doesn’t really care, but “it’s EpSTEEN.”

**UPDATE. 2017-03-03, more than a year later. Richard came in our shop today looking for a fax machine. While standing right in front of me, he made a phone call and identified himself, swear-to-god, as “Richard Epstine.”

So I’ve waved the white flag on Richard’s name because apparently even he isn’t sure how to say it. Maybe he can’t remember because he really doesn’t care.

But hear me now and believe me later: it’s Seba, like webba debba. Unless they don’t care, or officially change it, just to f*ck with me.